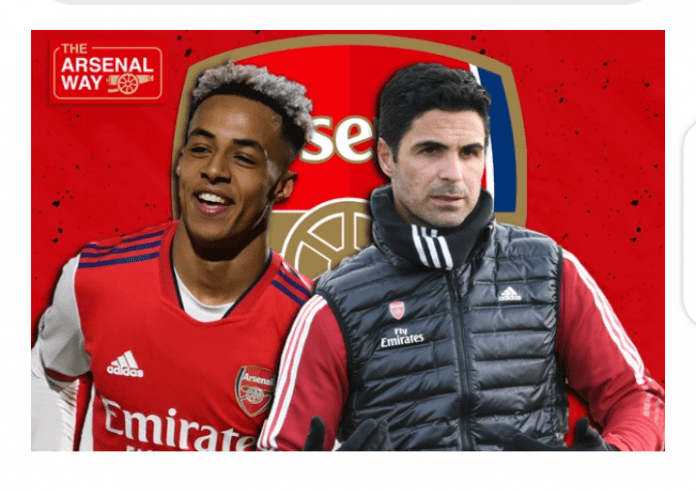 Arsenal have lacked goals and depth this January but Mikel Arteta was hesitant to bring on any of the club’s famous youth offerings despite their inclusion in the matchday squad. Omari Hutchinson gave the Spanaiard plenty to regret with his goal against Chelsea.

The lack of depth in the Arsenal team throughout January was caused by a number of factors both out of the club’s control and self-inflicted.

Arsenal lost Mohamed Elneny, Thomas Partey and Nicolas Pepe to the African Cup of Nations, Granit Xhaka was out with Covid prior to earning a suspension and Partey soon followed with a red card of his own against Liverpool. Ainsley Maitland-Niles was also prematurely sent out on loan.

This culminated in a winless month, two cup eliminations and a drab 0-0 home league draw with Burnley. Xhaka and Partey’s absence was felt but the lack of options from the bench, or so it seemed, hamstrung Mikel Arteta’s choice.

However, perhaps the Spaniard missed a trick with his depth options. In numerous games, Arteta included a number of youth players in his squad due to a lack of numbers.

Yet Arteta decided in all fixtures to give Eddie Nketiah an opportunity from the bench and refrained from calling on the kids. Only Patino earned an appearance against Nottingham Forest in the FA Cup exit.

Nketiah will leave Arsenal in the summer when his contract expires, despite persistent attempts to get the 22-year-old to renew his deal.

Arteta is a big fan of the player but Nketiah is determined to make his way as a starting striker. Something which has been near-impossible during his time in north London.

However, Arteta has arguably been shown to have overlooked some of the options at his disposal during the failed matches. Especially against Burnley where only Nketiah came on despite the Gunners’ desperate need for a goal.

Arsenal’s under 23s played Chelsea in the PL2 yesterday evening and both Salah-Eddine and Hutchinson were on the scoresheet thanks to two pieces of brilliance.

A spin and shot from Salah-Eddine gave Arsenal the lead and Hutchinson provided the finishing blow late on.

Except Hutchinson’s goal was something exceptionally special. Picking up the ball near the halfway line, the young attacking midfielder drove forwards with the ball, taking it past several players before driving a low shot past the Chelsea keeper.

After the departure of Aubameyang, it was interesting to see Hutchinson perform the Gabonese striker’s acrobatic celebration.

The incisive run and clinical finish were everything that had been lacking from the Arsenal senior side against Burnley and Hutchinson watched on helplessly from the bench.

Granted, there is no guarantee such a special goal would have happened, but not giving the chance to another option could prove costly at the end of the season.

With games coming thick and fast with rescheduling taking place, combined with the significant number of exits this winter, Arteta may need to fill his bench again with young talent. This time, he should have greater consideration for those at his disposal in times of need.