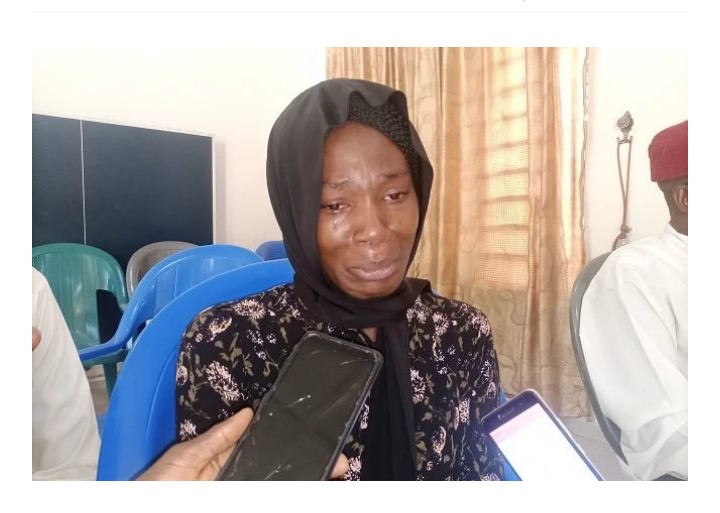 ADS: click here to buy your data at cheaper rate

For 23-year-old, Comfort Peter resident in Bauchi but from Bogoro LGA of the state, it may be a case of love, deceit and betrayal by someone she trusted and gave her love life to as she is now seeking for the military to fish out a serving soldier, one Sergeant Julius Simon, who allegedly impregnated and abandoned her.

While narrating her ordeal to journalists at the NUJ Press Centre on Thursday, Comfort said that “We met in April 2018 when I just graduated from Government Day Secretary School, Federal Low cost, Bauchi and he was on a special assignment at the Defence Industry Corporation (DIC) plant in Bauchi where I was assisting a food vendor and he approached me that he was in love with me”.

She added that, “I told my madam about it but she warned me against it. Julius kept disturbing me and when I told my madam, she said that I should tell him to go to my house and see my parents if he actually loves me. I told him what my madam told me and he agreed to come to our house.”

With tears rolling down her cheek, she said that, “He actually came to our house, met my father and declared his intention to marry me. My father asked him several questions which he answered and my father reluctantly agreed telling him to bring his people for introduction.”

Comfort further said that “One evening in August 2018, he called to tell me that they will be leaving Bauchi back to Biu having completed the assignment. He then asked me to come over to Shadawanka Barracks to see him so that we will discuss before he will leave the next day.

“I went to the Barracks as he directed, he took me to the house of one of his friends and slept with me all night. He was the person who ‘disvirgined’ me, he was so excited that he m

et me as a virgin promising that he will definitely marry me. I didn’t know that it was a fake love he displayed.”

According to her, all efforts to get him have proved abortive as he has stopped using the phone number he gave her.

Ready To Spin And Win on MSport? Register And Try Your Luck With This Fun Game. Win up to 4,000,000 MSport

“I informed him that I was pregnant and he assured me that he was coming but when I did not see him. I travelled to Biu to see him, he apologised for not coming as promised because he said that he was busy in the bush.

“I also went back to Biu with my uncle when the pregnancy was seven months old. He also apologised to my uncle and promised again to come with his family to formalise the marriage. “We came back to Bauchi but he refused to come as promised.

“I delivered a baby in June 2019, I told him but has refused to come to see the boy who is two years three months now,” Comfort said crying.

“Julius was the one that ‘disvirgined’ me. He promised to marry me but deceived me. I will never love or trust any man again, but he must take care of his son”.

Comfort, who came with her father, a retired Assistant Superintendent of Police, called on the military authority to fish him out and make him responsible for his son.

Efforts to get the military authority in Bauchi to react to the allegation proved abortive as an officer who spoke to our correspondent pleading anonymous advised that she goes back to the unit where the soldier is serving to lodge an official complaint.  CLICK HERE TO COMMENT>>>>>