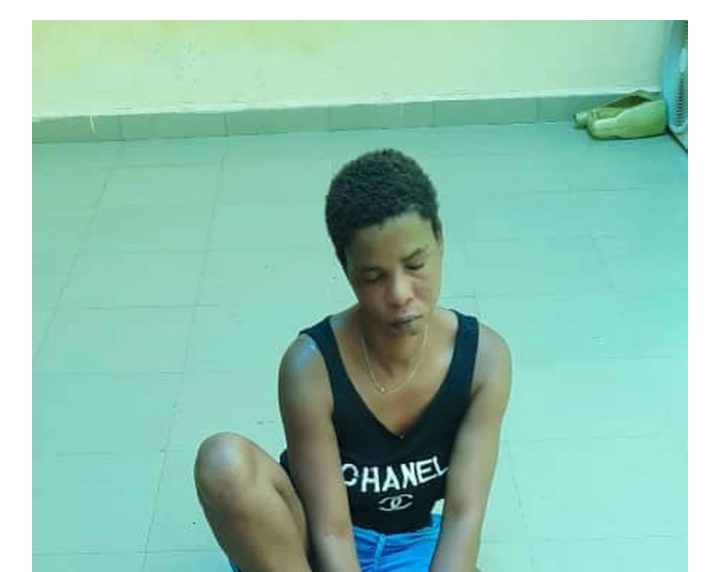 A young lady who belonged to a four-member robbery gang has been arrested alongside the other members of the gang and during her arrest, she was found in possession of a locally-made pistol, five bullets, some stolen phones, cocaine, Indian hemp, among others, the Delta State Police Command announced on Monday, October 25.

The lady, whose name was given as Blessing Oghule, was arrested by operatives attached to the Raider Command, when they raided black spots at Abraka axis in Asaba, the state capital, and arrested the lady alongside three other members of the gang.

The names of the three other arrested members of the gang were given as Nweke Abudi, Ebuka Paul and Sunday Inuse and it was gathered that the three men were the first to be arrested before the lady was also eventually nabbed at her hideout. The lady with the items recovered from her

Available information provided by the Delta State Police Command through its Public Relations Officer, Bright Edafe, on the Facebook wall of the command, revealed that after the arrest of the three men and following intelligence gathered, they swooped on the hideout of the lady and effected her arrest.

A Man Buys an Old Plane and Turns It Into a House. Look Inside!5 Min Tricks

The lady and three other members of the armed robbery gang

The police statement disclosed that the lady and three young men have given useful information to the police operatives while more investigations are on after which they will be prosecuted in the court of law.

Part of the police statement read: “The Raider Operatives of the state police command raided black spots at Abraka axis in Asaba. During the raid, three men and a lady namely Blessing Oghule, Nweke Abudi, Ebuka Paul and Sunday Inuse were arrested.

“While the men were arrested at one of the black spots, the lady was picked up at another spot following intelligence report gathered about their activities. They were said to be members of a robbery gang.

“They had given useful information about their activities to the police while more investigation are ongoing after which they will be prosecuted in the court of law.” CLICK HERE TO COMMENT