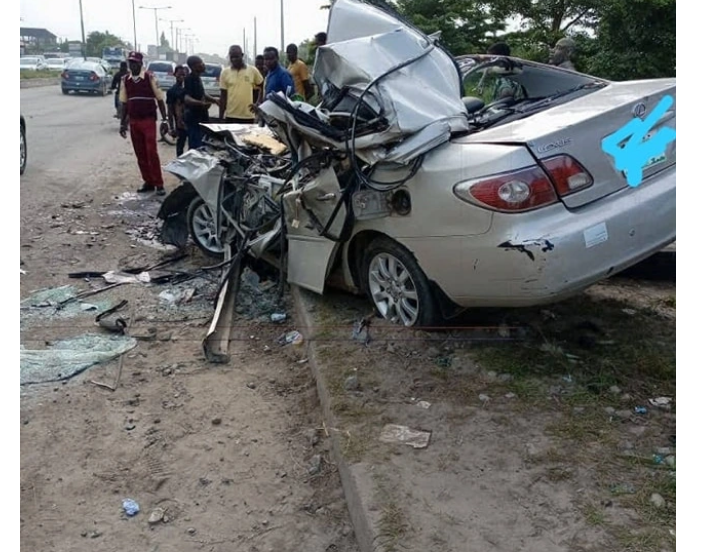 It was a sad development on the Lekki-Epe Expressway on Saturday, October 30, when the driver and passengers inside a Lexus car lost their lives after the car crashed into a stationary truck on the busy road.

The incident, which was said to have occurred in the early hours of the day, happened at Abijo GRA inward Epe, just after Sangotedo Shoprite on the Lekki-Epe Expressway, as it was gathered that the car ran into a stationary truck on the road.

According to information gathered from the Facebook wall of the Lagos State Traffic Management Authority (LASTMA) on Saturday, the fatal accident claimed the lives of the driver and other passengers, just as the car was seriously mangled after the incident.

According to the report, before the driver of the silver-coloured Lexus could see the stationary truck, it was already too late as he eventually ran into the truck, causing the vehicle to be seriously mangled. However, the truck was said to have been moved away from the scene of the accident before the arrival of LASTMA officials who took the photograph of the mangled vehicle used in this article.

It was also gathered that emergency officials had removed the bodies of the driver and passengers before the arrival of LASTMA officials who made efforts alongside officials of the Lekki Concession Company (LCC) to control the attendant traffic situation.

The incident was announced by LASTMA on its Facebook wall on Saturday, urging motorists to always be careful when driving, especially at night.

According to LASTMA: “This fatal accident occurred between a truck and this Lexus car at Abijo GRA inward Epe, just after Sangotedo Shoprite on the Lekki-Epe Expressway.

“According to the report gathered from our men, it claimed the driver’s life and other passengers in the car.