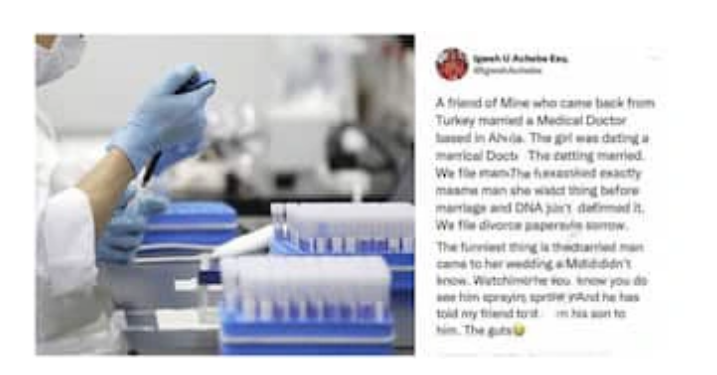 PAY ATTENTION: Click here to join Mjblogtv WhatsAppTV Groups to get the latest gist of the day

A once happy union is about to crash after the husband made a shocking discovery.

The Nigerian man who is based in Turkey had tied the knot with his heartthrob who happens to be a medical doctor by profession.

His wife was in an intimate relationship before her marriage

A social media user who narrated the story as shared by Instablog9ja on Instagram, revealed the man discovered after a DNA test that his second son doesn’t belong to him.

The husband would discover that the child belonged to a man who had sprayed his wife money on the occasion of their wedding.

The story goes that the lady had been in a romantic relationship with a married man before her wedding.

The distraught husband seeks an end to the marriage

Broken by his discovery, the man is said to be seeking an end to the marriage via a divorce.

This is as the original father of the child demands custody of his son.

The story has sent social media into mixed frenzy.

“I can imagine when he was using her to boost when they were dating that his gf is a medical doctor . Wahala for who no marry medical doctor.”

“Keep lying to yourself that you will change once you get married. You can’t have in marriage the discipline you never had when you where single.”

“Conducting a DNA on your kids at Birth should be encouraged and compulsory. A lot of Fathers are training another man’s children.”

“If your instincts tells you differently about your children’s DNA, abeg run DNA test to clear your doubts and avoid stories that touches.”

Meanwhile, Legit.ng previously reported that a man had discovered his 7-year-old child is not his after doing a DNA test.

The distraught man identified as Enifome revealed that the lady had other partners and it was not only him she was dating. The vexed man said he is taking the matter to the police station.

In one of the several clips shared online, he could be seen smashing a photo as he said so many unprintable words.

Enifome revealed that he was angrier when his father collected the child and said she resembled him. CLICK HERE TO COMMENT AND READ FULL STORY AND VIDEO